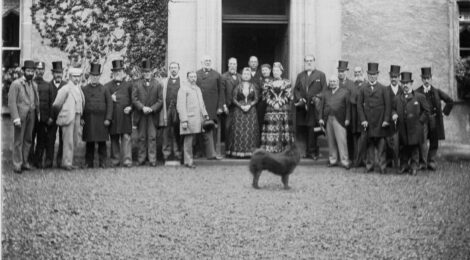 The Opening of the Winterfield Promenade

jherring / June 13, 2022 / Comments Off on The Opening of the Winterfield Promenade / From the Archives, Hays of Belton, Local Women

This month, we are going to look at the origins and opening of Winterfield promenade – known as the West Promenade – in 1893. Following an enquiry about the builder of the promenade, Jim Herring did research at the John Gray Centre, looking at The Haddingtonshire Courier and the Dunbar Town Council Minutes.

The photo above shows the plaque – made from Peterhead granite – on the promenade. You will note that Isabella Agnew Baird is not given her own name, but that of her husband and this denotes the status of women in the 1890s. The plaque was unveiled on 6th July 1893. The Haddingtonshire Courier reported that “Promptly at half past two, the procession started from the Town House- Mr Moody acting as marshal – in the following order: Pipers; Police with halberts, attached to which were white rosettes; the band of the Haddington Artillery Militia; the Magistrates and Town Council; the Freemasons, Oddfellows, Foresters, Gardeners, Shepherds and Good Templars; the 1st H.A.V. under Major Kelly  Etc., and all in regalia. Ensigns were carried by the different societies”. At this time, there were many different societies in Dunbar who provided help to their own members. They also took part in rifle competitions on Belhaven Beach when military volunteers were not practising there.

The plaque was unveiled by Captain Baird on behalf of the absent Mrs Baird and he stated “My sister trusts that the esplanade will be enjoyed by those who dwell in Dunbar and neighbourhood … on the day selected for this simple ceremony of declaring this esplanade open” and in the future by locals and visitors.

As seen in the photo above, Mrs Baird – given her title Of Cambusdoon – was presented with this certificate, which included the burgh seal, in thanks for her generosity. You can see a clearer photo of the centre of the seal here. The top sections reads DAVID H D. G. REX SCOTTOR and at the bottom BURGHI DE DUNBAR. The Courier also reported that “More than a year ago, the donor of this magnificent gift [Mrs Baird] offered the burgh a goodly sum of money to erect municipal buildings” but this was with conditions. The Town Council could not agree on what might be built or altered, so they “took the matter into their own hands and erected the promenade instead”. Further research into this decision will be done. The Courier continued that the people of Dunbar were pleased about the Council’s indecision as “the promenade has proved already a decidedly great acquisition to the town than the municipal buildings would have been”. So who did build the promenade? The Courier stated “The work of building the promenade was placed in the hands of Bailie George Cunningham while Mr Thomas Black undertook the surveying. The work was commenced in the autumn and completed by the end of the year”. The article concluded “The work is certainly a feather in the cap of Bailie Cunningham. He is to be complemented not only for the satisfactory manner in which everything has been planned, but also for having undertaken the work with his own workmen without going out of Dunbar”.

The photo above (from the DDHS archives) shows a formidable looking group of men and women, including Mrs Baird – the tall lady on the right in front of the door – in front of Belton House when Mrs Baird was presented with the Freedom of the Burgh in September 1894. Bailie Cunningham – the bearded man 4th to the right of Mrs Baird is included in the august party. You can read more about Belton House – demolished in 1967 – here. There seems to be some uncertainty as to the protocol of wearing or holding a top hat amongst the gentlemen present, so presumably either was acceptable on an occasion such as this.