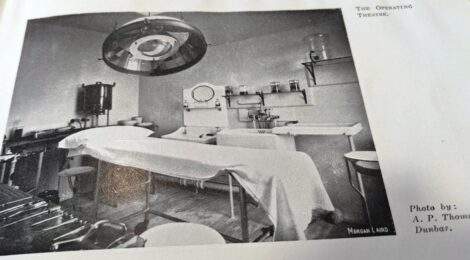 The Former Cottage Hospital in Dunbar

jherring / April 1, 2022 / Comments Off on The Former Cottage Hospital in Dunbar / From the Archives, Health

This month and next month, we will be looking at the former Cottage Hospital in Dunbar. The hospital produced a booklet c1930 and we will subsequently be examining some of the photos from the book. At the back of the booklet, there were several adverts for local businesses in Dunbar and these firms presumably paid the hospital for the adverts.

The first advert is for George Cunningham’s business. He built the Dunbar Parish War Memorial which now stands on the grassy area just before Winterfield Promenade. He was also responsible for the building of St Margaret’s – now the clubhouse of Winterfield Golf Club – 2nd photo above, as well as many other houses in Dunbar. The advert shows that his business covered internal building e.g. kitchen ranges (not a term used today) and you can see some examples of what his work might have looked like here. The advert also stresses the importance of “practical workmen”. George Cunningham also sold houses and was a contractor for people selling houses. He died in Stanley House, Dunbar in 1941.

The advert above – best seen enlarged – is for the “dispensary” i.e. what we now refer to as a chemist’s. George Grant took over the business from Purves & Co. David Anderson provided the following: “James Aitchison Purves opened the ‘New Dispensary’  at least as early as 1886 (Slaters Directory) in rented premises at 25 High Street”. It then changed hands but “reappeared trading as Purves and Company at No25 in 1913. James Aitchison Purves died aged 75 in 1929, which may have prompted the sale of the goodwill of the business to George Grant”. The advert is interesting  for the “Pure Drugs and best quality surgical dressings”. We might wonder why there is an emphasis on “Pure” drugs – as opposed to? It is also interesting for the inclusion of “Agent for British and Kodak Films”, given that not many people owned cameras at this time. The shop is still a chemist’s at 25 High Street and is now Lloyds Pharmacy.

The advert above is one for Aitken the Chemist, recently taken over and may be renamed Dunbar Pharmacy. The Robert Aitken shown here owned both the chemist shop and the “mineral water” business. The business was inherited by Robert Aitken’s two sons, Robert and William (Bill) Aitken. Bill Aitken took over the lemonade business and married Netta Murray, who was the pharmacist in the chemist’s shop at that time. The chemist shop was later taken over by Robert Aitken, after his mother had looked after the shop until he was old enough. (Information from Christine Mitchell nee Aitken). You can see an example of the  lemonade factory’s produce here.