This month, we are featuring prints of paintings of Dunbar Castle gifted to the Society by founder member John McNie, who was himself an accomplished artist. The paintings were scanned by Pauline Smeed, who provided the text for each print. A selection of links was added by Jim Herring. 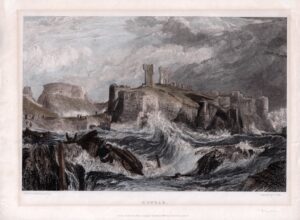 Drawn before Victoria Harbour was built and officially opened in 1842, this engraving clearly shows what remained of the castle on the right before the new entrance was made. The archway, thought to be the entrance to the great hall and which bore the coat of arms of the Earls of Dunbar and which collapsed in 1869, can be seen in the centre of the picture. The Duke of Albany’s blockhouse, completed in the early 16th century, lies to the left where it can still be seen today. The curtain wall which connected the blockhouse to the castle collapsed in 1993.

Turner’s original sketchbooks, now held by the Tate Gallery, contain “seventeen etchings and line-engravings” including several drawings of Dunbar Castle, made during his tour of Scotland in 1818. The sketches were in preparation for Sir Walter Scott’s Provincial Antiquities and Picturesque Scenery of Scotland, and Turner’s final painting of the castle. 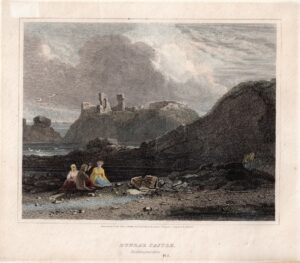 This image was originally published in Sir Walter Scott’s Border Antiquities of England and Scotland (cover of book). The three women who are seated, chatting, on the rocky shore at Bayswell are in contrast to the fishwife on the rocks behind. 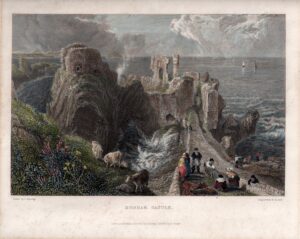 This slightly more romanticised view shows local fishwives and sailors gathered at the foot of the castle, with fishing nets drying and children playing in the sea. Again, the remains of the arched entrance to the great hall can be seen, with the Duke of Albany’s blockhouse on the left. It is thought here that the original painting was also made for Sir Walter Scott’s Provincial Antiquities and was displayed in Abbotsford. You can see examples of  the artist John Christian Schetky’s work here and examples of the engraver Edward Goodall here. 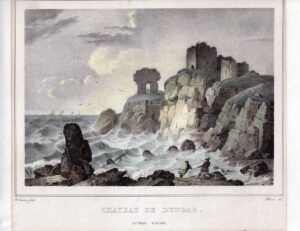 This print, from 1827, was made for publication in Vues Pittoresques de l’Ecosse (book cover). An illustrated travel book, the volume was produced in Brussels with text taken largely from the works of Sir Walter Scott. The book featured lakes, waterfalls, abbeys, and castles, as well as city views. Looking towards the castle from Bayswell, again what is left of the entrance to the great hall can be seen. In the foreground is a wreck, a feature of several Dunbar prints from this time. The two men attempting to haul in the remains are wearing kilts! Lithographer and artist Paul Lauters  (examples) produced the lithograph from an original painting by Francois Alexandre Pernot (examples) who first visited Scotland in 1824.

This month, we are returning to 1950 and the stranding of 147 pilot whales at Thorntonloch. Jim Herring had a request for his 2016 book Stranded: The Whales at Thorntonloch from a man in Shropshire who had been researching his local area around Ellesmere. He came across photos from a slaughterhouse in Hordley. The photos – some of which are discussed below – are from a National Library of Wales site – link here. The website notes “Images of deceased whales on the back of a truck; they had become stranded off Scottish coast and were sold to the horse and cattle slaughterers T C Price at Hordley. The whales yielded oil, high grade fertiliser and fishmeal”. An extract from a local newspaper indicated that 41 of the 147 whales stranded at Thorntonloch had been transported to the Shropshire slaughterhouse. On page 16 of the whales’ book, the author writes that the Haddingtonshire Courier had reported that the whales went to many parts of Britain, including “Ellesmere in Shropshire”. The hamlet of Hordley is 300 miles from Dunbar and the speed limit for lorries in 1950 was 20mph, so it would have taken a long time for the whales to be transported. The photos are shown here under the Creative Commons Licence. ** A warning. Some people might regard the photos as gruesome! 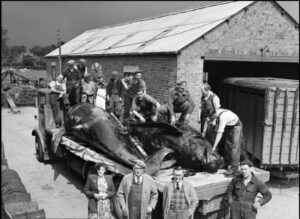 Thorntonloch whales in Hordley, Shropshire 1950 (Click on all photos to enlarge – recommended)

The first photo above shows the two whales which are almost the length of the lorry and the staff of the slaughterhouse. The photos are obviously staged for the camera, with the slaughterhouse men on the lorry and presumably the three managers/office staff in front. What can also be seen from this photo is, as at Thorntonloch when the whales were loaded on to the lorries, there is a distinct lack of health and safety precautions i.e. this photo could not be taken today. The date on the photos on the website is 30 May 1950. The whales stranded on the 13th May and the last were carted away from the beach on Monday 15th May. This means that the whales had been dead for more than a fortnight. Given that people complained of the smell of the whales on the beach on Monday 15th May, the stench from them by 30th must have been awful, unless there was some method of sanitizing them – unlikely. 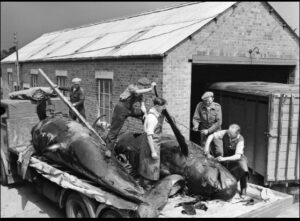 Cutting up the whales at Hordley in 1950

If you enlarge this photo, you will see that the men are using a very long and fairly wide-bladed tool and this is held in place by another man holding a rope. These men normally slaughtered and cut up cattle for butchers, so they would be using their normal equipment, which was different from the tools used to cut up whales. After contact with the New Bedford Whaling Museum about the tools in the photo above, the reply was “In closely examining your photos I see nothing to indicate that these men are processing those pilot whales in any traditional whaling fashion. I see no flensing knives, no windlass or capstan, no blubber hooks, pikes or gaffs. In fact, I see no tools whatever, apart from one hand hook and a butcher knife in one of the photos”. Flensing knives (photo) came with different shaped heads and were used to remove the blubber. Scran can tell you more about flensing. For other tools mentioned above, see here. So this would be a new experience for these slaughterhouse men? Would it have been an interesting one? 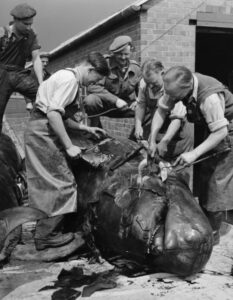 Butchering a dead whale at Hordley in 1950

The final photo above from the collection is perhaps the most interesting – or gruesome? The men appear to be very aware of the camera and are perhaps joking about something. They also appear to be having difficulty removing the outer layer of the whale’s skin – perhaps their tools were insufficient to make this a straightforward process. One of the men is using a hook as well as a knife, while the other man’s knife looks far too small to be effective on this huge sea creature. While this may appear a grisly sight to us, the slaughterhouse men would probably have taken it in their stride – another task, another challenge. In a social sense, the whales would no doubt have been the subject of stories told to families or pals in the pub. 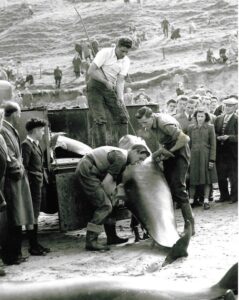 Loading whales at Thorntonloch in 1950, with a young Sandy Darling looking on.

The photo above from the whales’ book also shows the  lack of health and safety at the time. One noticeable aspect of this photo is that the men lifting the whale on to the lorry are smoking untipped cigarettes. The photos from Hordley look sanitised – for the camera – and only in the second photo can you see a man – sitting at the rear side of the lorry – who is smoking. It’s unlikely that, if photos had been taken without the workers’ knowledge, at least some of them would have been smoking, given that in 1950, 85% of men admitted that they smoked. The boy in the photo above to the left of the lorry is Sandy Darling who cycled from Stenton to see the whales. An interview with Sandy Darling appeared in The Guardian newspaper’s That’s me in the picture feature and you can read it here.

This month features some photos from the 1920s and focuses on Dunbar Gala days. The photos from the Fancy Dress Parade have been given by DDHS member George Robertson, who has also provided additional information about the photos. 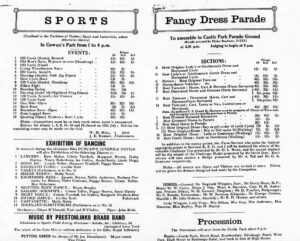 The poster above is pages 2 and 3 of the programme for Dunbar’s Gala Day in 1922.  As the enlarged poster shows, this part of the Gala Day took place in Cowan’s Park, which was a wide green expanse taking in today’s Bleaching Field and Dunbar Primary School. In the other 2 pages of the programme, it is noted that there will be Children’s Sports in Cowan’s Park; an auction conducted by Mr George Low; and a Fancy Dress Ball in the Assembly Rooms at 9pm. The programme states that the profits from the Gala Day will to to “Edinburgh Royal Infirmary and Local Charities”. This may have been an annual event during the 1920s, as the Organising Committee urged people to surpass the £160 raised for charity in 1921. This is the equivalent of about £9000 today. Of interest in the poster is the reference to Farm Servants in the Fancy Dress Parade. Despite it being 1922, farm workers were still referred to as servants, an indication of how they were regarded. In the Sports section, there is a Living Wheelbarrow Race, a Four-Legged Race and Quoiting – throwing hoops of various sizes and weights on to metal spikes. The John Gray Centre notes the establishment of a “four pin quoiting ground” at  Beltonford Paper Mill (photo and 1865 plans for) in the 1890s. 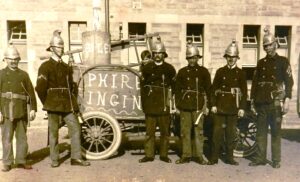 The photo above, taken at the Castlepark Barracks, shows an imaginative take on a fire engine and firemen. Note the “PHIRE INGIN” powered by the “BILER” above. In the photo, on the far right is George Robertson and next to him, wearing the clown’s nose is his son, also George Robertson i.e. the grandfather and father of the present DDHS member George Robertson. The older George Robertson was by then was a retired marine engineer. He had previously worked for Parson’s Marine Turbines in Newcastle and worked on the Turbinia  (good photo), the first steam turbine powered vessel, now in the Newcastle museum. The younger George was a motor mechanic at that time working for Kirkwood’s garage and later for Colin Stark mending busses. The uniforms and axes on them were presumably borrowed from the local fire station. 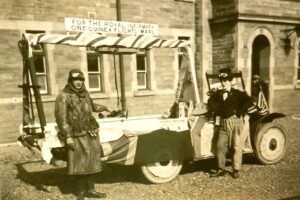 The photo above shows another imaginative and amusing entry for the Gala Day Parade in July 1922. The Charlie Chaplin like figure on the right is the younger George Robertson. The name of the man in the pilot gear is unknown but the present George Robertson suggested ” I know my father was friendly with the then owner of (I think) the Bellevue Hotel. He took my father flying in a DH Moth (photo of a 1920s DH.51) aircraft and gave him a camera to take an aerial shot of his hotel. This chap may have been him, because that looks like authentic pilot gear for the period”. The pilot is holding what may have been a model of a DH Moth in his left hand, and – a sign of the times – a cigarette in his right hand. It is not recorded how many flights to Mars were done on the day. 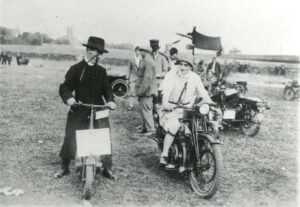 The final photo shows the younger George Robertson on the left, on an early motor scooter. You can watch a 1920 video of a motor scooter race here. George is dressed as a vicar and the sign on the front of his scooter reads “A CLERICAL ERROR” – a clever pun. There appear to be several other motor bikes in the photo and this may have been a display as well as a fancy dress parade. Also of interest in the photo (best enlarged) is the extent of Cowan’s Park at this time. There is a clear sight of the parish church to the top left of the photo and the railway line on the right. So, in1922, you were in the country as soon as you came down from the High Street.